Cutting Chai or Cyber Crime anyone? 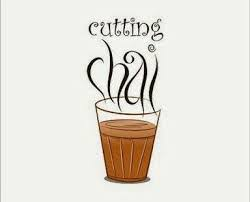 There is no escape from technology. Like it or not, we are all being dragged into the digital era - some joyously and some kicking and screaming.

Darshak is a young man, who even pays his chaiwalla with his digital wallet. Just like in the ads. One February in Sunday, that act of paying digitally literally scalded his throat. He was in a class for Financial Modelling, when he got two text messages. One saying his bank account had been debited by Rs 4523/- and a few minutes later, debited a second time with an amount of Rs. 10000/-.

Since he was in class, his phone was on silent and he only saw the messages about half an hour later, in his chai break - and then had a mini heart attack! His bank account was wiped clean. His debit and credit cards were with him. It was a Sunday.... what was going on?

Most of us know or can guess what happened. Somehow, a fraudster had managed to get his bank details and swiped out all the money from his savings account!

Lots of tips for those who ever have the misfortune of having to deal with this.
So what can we do to minimise our risks:
You could also watch JamTara on Netflix to figure out more ways that we get taken for a ride!
In the meantime, Darshak is holding his breath, wondering if he will ever get his money back! Something tells me that he will not pay his chai-walla with his digital wallet in the near future!
Posted by suj at 04:21 No comments: 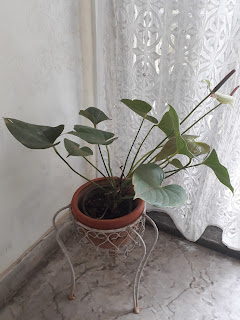 Thank you to all very informed women of the Prism group for inviting me to speak on 6th April 2018 at the Mahratta Chamber of Commerce and for the wonderful feedback below. As you can see your lovely gift holds pride of place.


[06/04, 20:39] Suj gave a talk at the maratha chamber of commerce. She had the audience in rapt attention and singing praises. Tara  Vaidya

[06/04, 23:16]
I loved it, got me thinking, one needs to learn and put some effort into understanding mutual funds etc. the subject is so huge, one has to make a beginning somewhere, Sujatha gave a good overview in very simple and understandable terms, she is a great presenter, it was a pleasure listening to her. A very good program, if there had been more such programs, I would have stayed on as member, thanks for letting me attend.
Poonam Gupta

[06/04, 23:37] Good evening!
I had to run off because I didn’t want to be late for the Friday family dinner....
Thanks so much for inviting me!
I really loved the afternoon.... the presentation you’ve created is informative, humorous and easy to understand. As are you!
Now tell me what exactly I need to do to rope you in for the same thing for WZCC women entrepreneurs?
Mahrukh Bharucha

Thanks for organising yesterday' sprogramme .and getting to talk to us young investment advisor Sujata Kabraji   who understands women' problem and is very knowledgeable.
Thanks Sujata  for very  infirmative talk.
Shobha Deshmukh

Thanks Sujata for giving us basic inputs of finance planning to enable us to plan and enjoy our old age !

Thanks Sujata for giving us basic inputs of finance planning to enable us to plan and enjoy our old age !

A complex subject like finance explained in very simple and easy to understand terms. Thanks Sujata.
Lata Phatak

Thanks Sujata for explaining it so well
Romi Advani

[09/04, 09:09]
Sujata’s talk was very well conducted and presented . Just the right amount of simplified explanations on various aspects of finance , investments, and tax implications for non finance people-sr. Citizens to grasp easily . Some information were very helpful for me too.

[09/04, 09:09] My compliments to Sujata for her flawless handling of the powerpoint presentation
So well simplified.
I would surely love to interact with here whenever she visits Pune next.
aruna advani

Thanks for organising  excellent  lecture  for us I would like Sujata to take more workshop for Prism  members so we understand  the investment  cycle properly.Thanks once again
neelam bansal

I liked  the advice on will preparation
And safe guards on insurance policy realisation.
Other tips to save money was useful.
On the whole a well organised  program
Tku.
Rathna Narayanswamy

[09/04, 11:28]
The talk was very good and informative. Some members said that we should have more such talks .
Veena agarwal

Thank you PRISM for organising the talk by Sujata Kabraji. The program lived up to its promises made in your invite: paranoid about numbers? Make your savings account work for you, insurance and pension plans etc.
Sujata’s presentation, with her humour and appropriate illustrations, personal experiences and anecdotes was able to build a rapport with us. Her patient and honest responses to the many questions raised were encouraging.
An informative talk. I would certainly like another more detailed session with her and from the comments overheard after the talk, most of the group felt the same.
Mira Bhojwani
Posted by suj at 01:02 No comments:

The Reserve Bank of India offers bonds with a taxable rate of interest of 7.75% p.a. But before investing, its always good to know as much as possible about the product. Some of the key bits of information are below:

Breaking the Writer’s Block on Finance for the Network of Women in Media, Mumbai 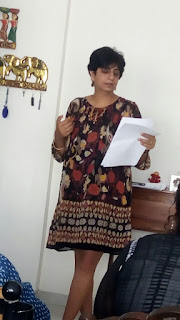 ·       Paranoid about numbers? Do you get cross-eyed when your CA sends you all those forms?

·       Have more than a couple of lakhs lying in your savings account and would like to make it work harder for you?

·       Ever worried about how you would manage in this hire/fire culture?

·       Could freelance work be an option? Are salaried people really at advantage? What do you need to think about before you take the plunge?

These were some of the questions discussed on 24th Feb 2018 with the dynamic women in media.
Posted by suj at 03:31 No comments:


Ajith Menon - putting me on the spot about saying 'No' to clients, not having a visiting card and other such crazy questions
Posted by suj at 02:36 No comments: 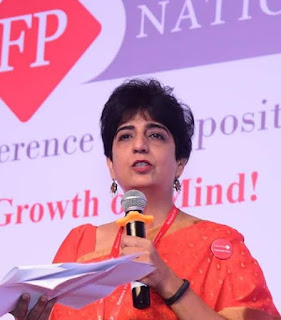 This was a fun event - total tongue in cheek - gently roasting the speakers - it was a lot of hard work but tons of laughs! The topic was close to my heart too! Ethics at heart, Growth on Mind.

Ouch! I broke my writing arm!

Have you ever thought about this? If you are single, most likely you operate your bank accounts and investments in your single name.

What if you have a fall and can't sign for a few weeks or months? How would you pay your bills, draw money or access your investments? It's a thought that has haunted me over the last few months whilst I stepped in to help a friend in a similar situation.